Everyone age 2 and over is required to wear a mask while in the Library. 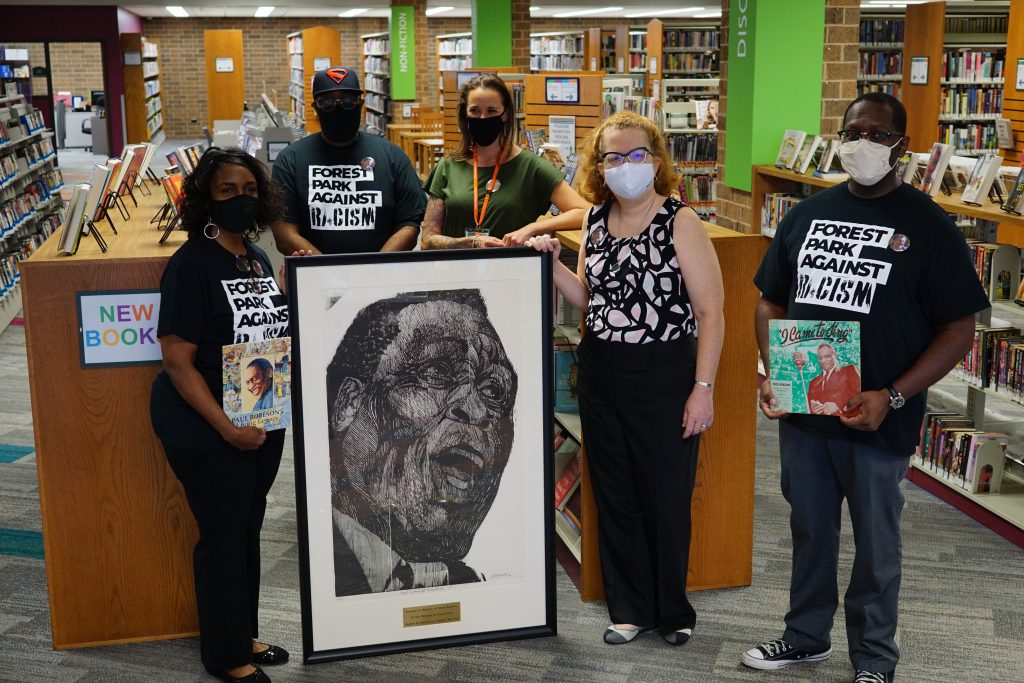 Robeson was born in 1898 and lived a fascinating life both here in America, and abroad.  During his life, he became a football star at Rutgers University, attended law school at Columbia University in the 1920s, became a player in the Harlem Renaissance scene, starred in the classic film Showboat, and was blacklisted during the McCarthy era.

The Robeson collection, which includes a framed original artwork of Paul Robeson, educational materials, posters, music, artwork, and papers, was lovingly assembled by Forest Park resident Mark Rogovin who passed away in 2019. Rogovin was motivated in building this collection, in part, to support a successful campaign to garner a postage stamp to celebrate Robeson’s 100th birthday in 1998. 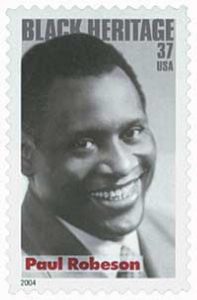 “One of the things that Paul Robeson exemplified was the whole idea that you can do anything and reinvent yourself and change your mind and grow. He wasn’t afraid, he was curious. I think that part of fighting against racism is to have a level of curiosity and make a decision to stay open and learn about other people,” said Marjorie Adams, a member of Forest Park Against Racism.  “I think Paul Robeson exemplified that, and what I have learned about Mark [Rogovin], he also exemplified that with a lot of humor. If we are going to move forward, we are going to need humor, be courageous and have those challenging conversations–and know that we will come out on the other side as better people.”

Mark Rogovin’s wife Michelle Melin-Rogovin proposed the idea of making her husband’s collection available to the public through the Library.

“I am giving this gift to celebrate the memory of my husband Mark Rogovin, a 33-year resident of Forest Park, who was dedicated to a world of equity and freedom for all people,” Melin-Rogovin said, “and to honor the work of Forest Park Against Racism, who are continuing the work that he started.”

On September 4, the portrait of Robeson was given to the Library in a small socially distant event with members of the Library staff, the Historical Society of Forest Park, Forest Park Against Racism, and Melin-Rogovin.

Robeson’s portrait will be hung in The Commons on the main level of the Library. The remaining collection is being archived by library students at Dominican University. When the project is completed, it will be made available to the public in-person and online.

“We are so happy to be able to house this truly unique collection. We accept this donation in partnership with Forest Park Against Racism with whom we share and support a message of anti-racism.” said Library Director Pilar Shaker. “Thank you to Michelle for making this available to the community.”

To learn more about Paul Robeson, go here or watch this streaming video on Kanopy here.