The Adult Services Department celebrated Asian Pacific American Heritage Month (May) and Pride Month (June) by catching up with the irrepressible actor-writer-activist George Takei.   We grappled with the history of Japanese-American internment camps during WWII, we cried at Takei’s memories, we laughed with his humor, and cheered for his legacy.   The 2014 documentary ‘To Be Takei’ is available on Kanopy and his new graphic novel ‘They Called Us Enemy’ is available on Hoopla.

Click on the image to go to the graphic novel or film. 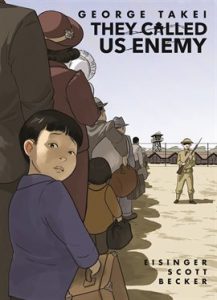 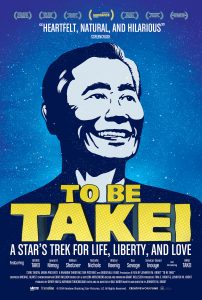 ANN
Takei says, “That remains part of the problem—that we don’t know the unpleasant aspects of American history … and therefore we don’t learn the lesson those chapters have to teach us. So we repeat them over and over again.”  Such a prophetic statement given that this past Sunday’s headlines read: “California Women Accused of Posting Racist Notes at Homes of Asians.” The note stated that Asians carried the virus and they needed to go back “home”. The “Asian enemy” can either be interned (as they were in the 1940s) or expelled today. Both the film and movie clearly demonstrate this.

AMILCAR
“To be Takei” documentary is easy to watch in that it is uplifting, fresh, and funny. Yet, it is frightening and very deep, in that it articulates the legalized racism that Takei’s family faced in his childhood when they were placed in an internment camp, and in how he needed to hide his homosexuality to assert himself in a restrictive society and TV industry. The heaviness of the subjects, however, is carried breezily throughout the film by George’s positive and smiley personality along with Brad, his husband, creating a sort of dual-force narration unit with a single voice.

While the documentary flows through the multiple stages of Takei’s life and career with a lighthearted tone, his graphic memoir, “They Called Us Enemy”, is fascinating as well, but terrifying for its ruthlessness and timeliness. It centers in the almost four years the Takai family spent in the internment camp where Japanese Americans were incarcerated. Indeed, it illustrates the emotions, impressions, imaginations of a 4-to-8-year-old boy who is making sense of and survives a cruel reality only possible by the unshakeable character of his parents. But ultimately it serves as a cautionary tale; it is a lightning bolt which beams over and reveals a shameful period in the American consciousness when legitimized racism was asserted, a time that must not be forgotten.

SKYE
George Takei’s graphic novel, They Called Us Enemy, moved me deeply.  This shameful episode in American history, as recounted by a survivor, educated me about the Japanese-American internment camps in a way no history class in my era ever did.  As George and his family were transported by train to their first internment camp while not knowing what they were going to find at the end of their journey, I was reminded of the parallel train journeys happening in Europe, transporting Jews and others to their deaths.  Ultimately, George Takei, celebrity and advocate, tells a story of survival that is amazing.  I was reminded of the classic graphic novel, Maus by Jules Eisner.

Following this reading with a viewing of “To Be Takei” available on Kanopy, I felt deep admiration for George Takei.  This entertaining look at his life from his childhood to Star Trek to marriage to Brad Takei and ultimately his heroic advocacy for LGBTQIA rights and the Asian American community made me cry, laugh, and feel a new appreciation for the resiliency of the human spirit.

MY TANG
Thanks so much for the recommendations. Here are some thoughts about the book and movie:

They Called Us Enemies helped me learn more about the Japanese-American internment camps and the treatment of Japanese Americans during WWII, as the topic was largely glossed over in school. It brought me to tears because it made me think back to the time my parents and sister spent in a refugee camp in China, the people behind barbed wires today, and brought back memories of the racism I endured when we learned about the bombing of Pearl Harbor in school as many of my peers assumed I was Japanese. It was well-written, a very easy read, and so timely. I’d highly recommend it to a wide range of readers.

To Be Takei was so uplifting. I am glad I read the novel prior to watching the documentary. I did not know too much about George besides his role in Star Trek and activism, but to see him on a more personal level was really empowering. He endured so much, yet he did not let those experiences take away his joy. Instead, he used it as fuel to fight for the rights of LGBT+ and other marginalized communities. I’d highly recommend the documentary.

MATTHEW
I found They Call Us The Enemy very enlightening. It’s something I knew happened, but I had never read anything about it, really. The documentary was entertaining. It kind of jumped from serious to silly quite often, but I think that encapsulated George Takei perfectly.

SANDIE
This documentary on the life of actor and activist George Takei (Ta-Kay) is very entertaining and inspiring.  To learn about all the hardships Takei had faced, yet can still be so positive is something I was truly moved by.

I learned things that I had never encountered in any history book.  Moving and thought provoking, I highly recommend this graphic novel.