The FPPL Adult Services team watched a film from our streaming video collection, Kanopy, together and we’re here to report on the great experience.  Kanopy is a resource dedicated to enriching, inspiring, and bridging cultural boundaries through thoughtful entertainment.  In fact, watching this film “together” (from our own houses) and then having a Zoom discussion, in fact, inspired us to share with you how cool we think Kanopy is.

We all found Kanopy easy to use because it is supported on any device.  You can watch on your computer, through an iOS or Android App, on Apple TV, or with a Roku.  One staff member watched the film over three days using different methods:  on his PC browser, on his phone, and then he used Chromecast to screen the finale on his TV. 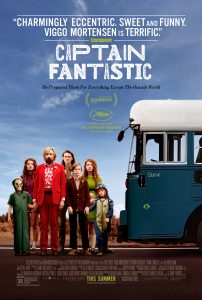 Deep in the forests of the Pacific Northwest, isolated from society, a devoted father (Viggo Morensen) dedicates his life to transforming his six young children into extraordinary adults.  But when a tragedy strikes the family, they are forced to leave this self-created paradise and begin a journey into the outside world that challenges his idea of what it means to be a parent and brings into question everything he’s taught them.

Ann:  “Captain Fantastic is a great film to watch during a pandemic. The family demonstrates the powers of self-reliance and self- examination or reflection.  In the woods, there’s time to read and play music without technology.  This movie made me think that maybe sheltering from our dominant culture and vulgar consumerism is a good thing for awhile.  The family in the movie reminded me of the survivalists in Tara Westover’s memoir, Educated, but they are not violent or cruel.  This is a peaceful film to watch at a weird time like this.

Matt:  “This wasn’t just a Hollywood comedy or quirky feel good family movie.  The performances are excellent.”  (In fact, this film is rated R and has adult themes.  This is not Little Miss Sunshine; it’s for a more mature audience.”)

My:  “I found the title, Captain Fantastic, surprising.  Based on the title, I thought the film was going to be a superhero movie.  Actually, the title is ironic because it is a very human drama.”

Sandie:  “I chose the film for us to watch.  It was fascinating to browse in and choose from Kanopy’s collection.  There are so many independent, foreign or classic films and documentaries that I have never seen. There’s even a Kid’s version of the site.”

Ann:  “As a librarian, it was fascinating to see what books they were reading for their self-taught education.  The cultural references – from Noam Chomsky to Middlemarch to the graphic novel Maus– were amazing.”

Amilcar:  “This movie showed life at the extremes, living off the grid vs living rich in the suburbs.  The music complemented and enhanced the drama of the cinematography and story. Viggo Mortensen’s character also inspired me to give myself a home haircut!”

Skye:  I appreciated the raw and honest family dynamic portrayed.  This family has a lot of straight talk about mental illness, suicide, and even sex. The kids are taught from an early age to be with what is real and to solve problems as they are.  They don’t lie about anything, and this is the crux of their redemptive bonds with each other.

Matt:  After you watch this, check out Leave No Trace or Hunt for the Wilderpeople, both also on Kanopy.  Or try the documentary, Requiem for the American Dream, featuring the real Noam Chomsky.